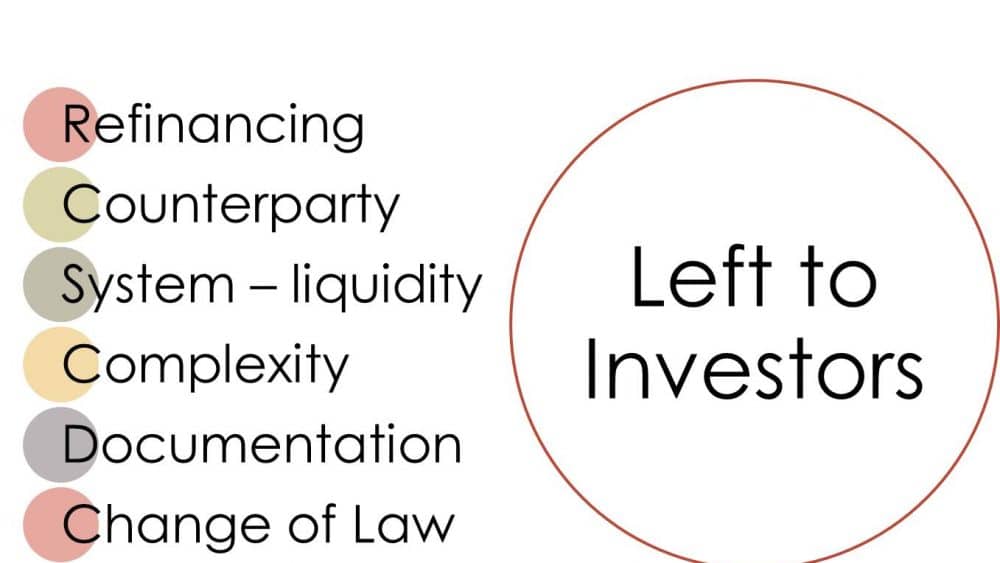 A particularly critical time for risk creep between the parties in a Public Private Partnership project comes at the change over from construction to operation, when everyone seems to think the project is de-risked and the job is done. While it is uncommon for a project to fall apart irretrievably at this stage of its life, it is far from de-risked. By way of observation, the NPV of operating costs on a tollroad with tunnel is of the same order as the NPV of the construction costs. If risk flows with the expenditure of funds, only half the risk has disappeared by the end of the construction period.
There are six main issues which need to be managed continuously by the board and management which rarely find their way into risk management plans or project documents.  Refinancing, Counterparty, System Liquidity, Complexity and Change of Law.

Refinancing used to be the pot of gold which investors shared in regularly as the project matured. Now it is either shared with the government or bid away in the tender process. So why is it a risk? Refinancing is the subject of two unrealistic assumptions in many bid Financial Models. Firstly, the margins assumed in future refinancing events are often indefensibly low. Many recent projects I have reviewed have assumed 60 basis points (bp) margins throughout the project life compared to the 140 to 200 bp currently on offer.
The second assumption often understated is the debt free period assumed at the end of the concession period. Almost every model I see assumes that the project will maintain considerable debt until the last 12 months of the concession period. Banks are more likely to require 2 years, while under pressure they may relent to 18 months but one year is now impossible to achieve. These assumptions in combination can shave returns by 1.5% to 2% over a long concession period. So refinancing can be a considerable risk to investor returns in modern projects.

Counterparty risk is the big lesson from the Global Financial Crisis. You never know who you are dealing with until they try to call your loan. This risk becomes white hot in times of difficulty for a project when a “Special Situations Fund” acquires slice of debt a discount with a view to negotiating a superprofit in the sale or refinance of the distressed asset.

Liquidity is not an issue today, the financial system remains awash with cheap cash. It won’t last. What makes it more dangerous is the size of the refinance task of major projects which can seek $3bn to $5bn at the first refinance. During the Global Financial Crisis, many otherwise viable operating projects experienced considerable difficulty refinancing one tenth of this amount in the Australian market with the departure of many foreign banks and the emergence of portfolio concentration risk in the few that remained. The bond market was nowhere in sight so there was no alternative finance stream. System illiquidity will return from time to time in the future, and it falls on all parties – but the consequences are greatest for investors.

Public Private Partnership projects are complex, made more so by the finance structures used and, more particularly, the accounting standards applied to them. I will focus for the moment on accounting standards. In infrastructure projects, an interest rate swap is a standard risk management instrument required by lenders, investors and governments as part of the project structure. Accounting standards seem to have a very different view. It seems we are all budding Jeffery Skillings waiting to pounce on the world with our own Enron avatar. The result is accounts reporting hundreds of millions of dollars of loss reflecting one side of the swap transaction – which, according to accounting standards, somehow has greater relevancy to the profit and loss than the debt that it hedges. With major shareholders able to exert control over a company, they can find those same accounting standards causing them to consolidate hundreds of millions of loss.

These complexities have impacts from financial to stakeholder management and beyond, impacting on suppliers, contractors, staff, investors and governments.

The other side of the complexity coin is the difficulty in documenting what everyone has agreed in a way that actually reflects that agreement. There is always the chance that back to back documents will not match while phrases and expressions don’t actually mean what we thought they did. That is normal. However the area I would like to focus on is the mismatch between banking documents and operations contract.

While operators insist on having six months to a year to remedy defaults, banks see an operator default as an immediate trigger to allow withdrawal of their funding, with cure periods set in the order of 30 to sixty days. This mismatch is incurable and creates a risk, however unlikely, that turns an operator default into a project failure, even if the default happens in Japan or the United States and has no real bearing on the local operation. Of course, the banks have it in their power to suspend action in such a case, but I am never happy putting my future in the hands of the banks.

In addition to these risks, there are also some well recognised risks held by the SPV. Chief among them is the change in law risk, which usually includes taxation law. A current example is the tightening of the thin capitalisation rules which reduce the safe harbour provisions from 75% debt to 60% debt. While these changes are aimed at capturing profit shifting by multinationals, they sit squarely on most major infrastructure projects, the largest of which have majority international investors. The push by State Government agencies to increase competition for major PPPs has brought many large international contractors into the game.

Most of these risks never appear in the risk management plans I have seen, maybe it is time to review yours to see how they are treated.

Malpine Resources contains short articles on topics of interest to the infrastructure management and investment community.

Brian McGlynn is a highly experienced project and investment consultant with a unique combination of technical, financial, government, and private sector experience of major infrastructure projects and PPPs.